If you want to build a project, you can hire Scifabric for designing, building, and analysing your data. Check Scifabric solutions.

The PYBOSSA server is a web server with a RESTful API that distributes tasks among volunteers using a simple API.

For using this guide, you can try the PYBOSSA technology using our Scifabric’s free PYBOSSA server CrowdCrafting.org. You can start directly using this service without any cost, or if you prefer you can [hire one of our PYBOSSA server options] (https://scifabric.com/pricing/).

The following diagram gives you an overview of how a PYBOSSA system works: 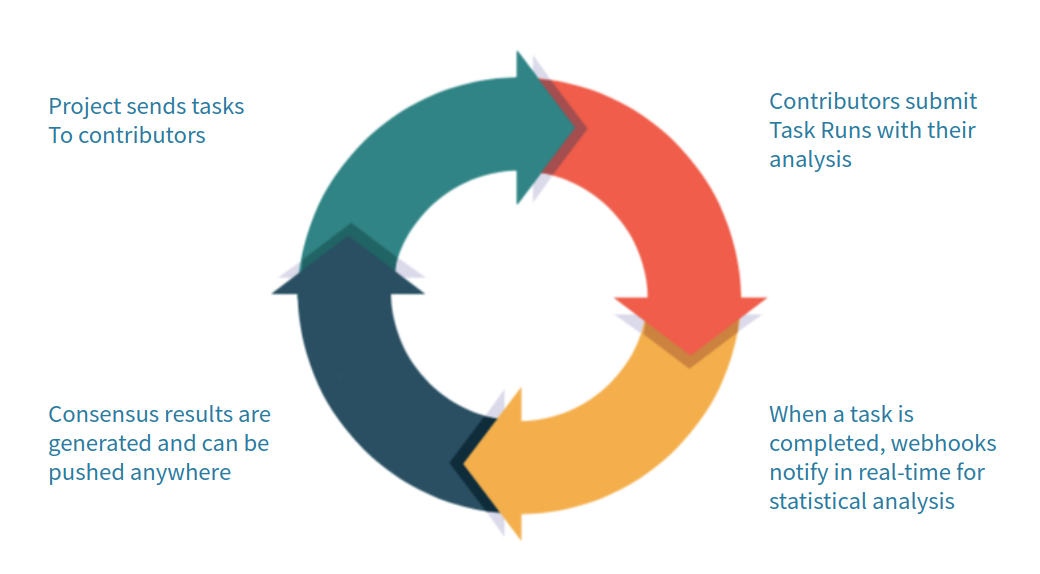 This distribution happens when a volunteer requests a task. PYBOSSA checks which available tasks can be sent to the user, and sends them. When the volunteer sends a task run (a classification, transcription, analysis, etc.) PYBOSSA saves it.

PYBOSSA supports real-time data analysis. If the project has this feature enabled, PYBOSSA will notify, using a webhook POST, a microservice to do the statistical analysis and save a result for the given task based on the task runs of the task.

A PYBOSSA project is an HTML page with some JavaScript that will load a task from a PYBOSSA server and present it to the volunteer and ask the user to, for instance, classify an image or transcribe a handwritten document.

The Web Interface is an excellent start point to learn a bit more about the PYBOSSA architecture and how you can develop a simple project in a short time, while the API will give you more options regarding flexibility.

Adding tasks to a project¶

Creating a project is simple. You fill in some data via the web interface, and the project is created. Once you have it, you will need to add tasks to them. To do it, you could use one of the available PYBOSSA importers:

If you need an importer, please, add a Github Issue in our repository so we can implement it.

While these importers solve most of the problems, in some scenarios you will need to import data into your PYBOSSA project in a different way. For these cases, we recommend you to use our command line tool pbs or just write a script that will talk directly to the PYBOSSA API.

The templates provide the following tools:

We recommend you to read the tutorial as it gives a step by step guide about how you can create a project, write a script to import tasks, create the Task Presenter using the Flickr Person Finder template.

Asking the crowd to participate¶

Once we have the data in place, we would need to show it to the volunteers. We will achieve it by using the task presenter.

As PYBOSSA runs mostly on the web (you can build native iOS or Android apps as well), a task presenter is usually an HTML page where we will load the task. For example, if we are classifying an image, we will insert the picture along with a form where the user can submit the response (the Task Presenter would also take care of sending that response back to the PYBOSSA server via an API call).

Task Presenters can be written in any language and run anywhere as long as they can communicate with the PYBOSSA server via its API. PYBOSSA has a headless solution where developers can build native iOS and Android apps for interacting with PYBOSSA as well as Single Page Applications using popular Javascript frameworks.

Scifabric provides several template projects that can be re-used to create your project:

The template projects provide the task presenter, where you can learn how to use it. We recommend you to read the tutorial as it gives a step by step guide about how you can create a project, write the Task Creator and Presenter from scratch using the Flickr Person Finder template project.